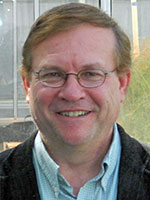 William T. Hlubik is a county agent and director for the Rutgers Cooperative Extension of Middlesex County’s EARTH Center in South Brunswick, NJ. He also teaches two undergraduate courses--“How to Start and Manage a Small Farm” and “Applied Analysis of Successful Agricultural Enterprises”--at the Rutgers School of Environmental and Biological Sciences and helped to organize the first Rutgers Agricultural Club for undergraduates in 2015 and serves as the faculty advisor. Bill has more than 26 years of experience providing, advice, mentoring, leadership, and support for new and experienced farmers in New Jersey and the surrounding states. His areas of expertise include vegetable and small fruit production as well as agricultural marketing and communication. He created the award-winning “If Plants Could Talk” television series for NJ PBS and produced and hosted 22 episodes. He has written hundreds of newspaper articles for the state’s largest newspaper, The Star-Ledger, and has been interviewed for his expertise by CBS, ABC, FOX, NJN, News 12 NJ and NPR news networks regarding his programs and research. He has managed over $5 million in grant funds and has won more than 100 state, regional, and national awards for Cooperative Extension programs and applied agricultural research at Rutgers. Bill and colleagues on the strawberry production team at Rutgers released the ‘Rutgers ScarletTM’ strawberry in 2015. This new variety has been distributed to growers in over 22 states across the United States. He conducts research in methods to extend the growing season for New Jersey and Northeast farmers using low and high tunnel systems for conventional and organic production systems. He has published in HortScience, HortTechnology, The Journal of Extension, The American Vegetable Grower, The American Fruit Grower, and The New Jersey Farmer. Bill has a long and productive history working together with farmers and agricultural organizations throughout the state and has extensive experience in media outreach through newspaper, radio, and television.