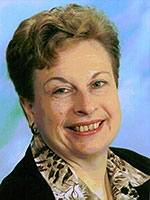 Dr. Karen M. Ensle, Ed.D., RD, FADA, CFCS, has been a family & community health sciences educator in Union County since 1987 and has taught 5,086 hours of classes to over 28,261 participants. Dr. Ensle is a registered dietitian, Fellow of the American Dietetic Association and certified in family and consumer sciences. She is the project investigator for a $495,000 grant with match of $570,509 for the N.J. Food Stamp Nutrition Education Union County Project. She also oversees the Expanded Food and Nutrition Education Program and the Union County Senior Meals Program feeding over 1,500 seniors at home or at 25 congregate feeding sites. In 2000, Dr. Ensle received the Mid-Career Award from Epsilon Sigma Phi fraternity and in 1998 she received the Award of Excellence for Faculty. In 1997, she received the Distinguished Service Award from the National Extension Association of Family and Consumer Sciences, 1994 she received the Home Economist of the Year Award from the N.J. Home Economics Association, 1993 she was the recipient of the Diet Health and Environment Award for her nationally known program "Smart & Healthy Supermarket Tours." In 1995 she received the Nutrition Research Award for her follow-up study of the supermarket tour. In 1992, she received the "Outstanding Nutritionist of the Year Award" Dr. Ensle is currently one of three of the N.J. Dietetic Association Delegates to the national organization. She was president (1999-2000) of the N.J. Dietetic Association and holds the office of treasurer for Ending Hunger, Incorporated a 501 C3 non-profit organization that is committed to ending hunger in New Jersey. On October 1, 2001 she was appointed by Acting Governor Donald DiFrancesco to the N.J. Hunger Prevention Committee. She is the co-chair of the N.J. Nutrition Council and editor of the "Nutrition Communicator" In addition she was elected in 2001 to serve as the chair of the Advisory Committee on Public Policy of the Society for Nutrition Education. In July 2001 she was certified as a Character Counts! trainer from the Josephson Institute of Ethics, Marina del Rey, California. Ensle received her doctoral degree in allied health education from the Graduate School of Education, Rutgers, and holds a Master of Science degree in nutrition and education from Hunter College, City University of New York and a B.A. in home economics education from Montclair State College.